The Power of Christ

Rev 12:11  “And they overcame him by the blood of the Lamb, and by the word of their testimony; and they loved not their lives unto the death.”

Having not long been in Haiti, I was still learning the land and the people. Sitting in a church service one Sunday morning, a teen girl suddenly began flip flopping and going crazy in the middle of the service. Most everyone, over a hundred people, continued as though nothing was amiss, while a few men picked the girl up and carried her out of the church. Curious, I went to see what this was all about.

The girl was laid on the ground. Some ladies came to fan her, and because she was seemingly unconscious others were sticking sharp objects under her fingernails to bring her back to consciousness. I stood there very skeptical. “She just wants attention,” “She’s just putting on,” I thought. Several other times this “phenomena” occurred during church services or activities, and my American-televised mind could not come to terms with what I was seeing. “Was this for real?”

It came closer to home one evening as two ladies came to my house for our regular weekly prayer meeting. During that evening a devil came over one of those ladies right there in my living room. This lady was a young adult. She had confessed Christ, had been baptized, and was faithful and growing in the Lord. How could this happen to her? She told us how this had been happening to her since she was a little girl and explained the experience to us. Ever the skeptic, I still was not sure, until one late night a few nights following. As I slept in my bed I dreamed that a dark figure was standing beside my bed wanting to consume me. It scared me so badly that I awoke, said a prayer, checked on my babies and tried to go back to sleep. As I lay back down and drifted uneasily again into sleep, the dark form was now at my feet trying to consume me and was going up my body beginning with my feet. In my spirit, something warned me that this was no dream, I must pray. I jumped out of bed and began praying out loud. I began quoting verses on the blood of Jesus Christ, I sang hymns about the blood, I pleaded the blood, and I spoke my testimony of when I got saved and how out loud. This went on for about an hour. Being very late in the night, and being sleepy, I felt perhaps I could sleep. As I considered going back to bed, the picture of the King of Israel standing by the prophet Elijah’s sick bed played like a video before my eyes. The king only shot three arrows and stopped when he should have shot five or six to win a complete victory over the forth coming enemy. As that Bible story was brought to me, the Holy Spirit brought my six-month old baby girl in my mind attached to that vision. The message was if I stopped now, I could sleep, but the victory would not be complete and the next attempt of entry would be through my daughter.

I went to another room with my Bible and song book and I fought that battle all night: praying, singing, quoting verses, speaking my salvation testimony out loud, claiming the blood, the power, the authority, the name of Jesus Christ my Lord, my Savior, my Protector, my Keeper. As the sun began to rise over the mountain and the cocks began to crow, the last arrow was shot and I felt a weight of oppression lifted from my spirit. The battle had been fought, and by the power of Christ it had been won.

To prepare for His kingdom and live for His glory we must be blood-washed believers, filled with the words of Christ, secure in our position as sons of God, and ready to engage by prayer in the spiritual battles ever raging around us. 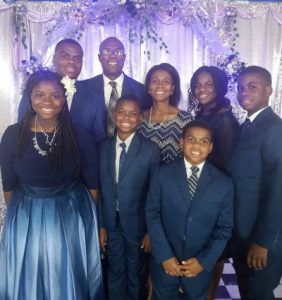